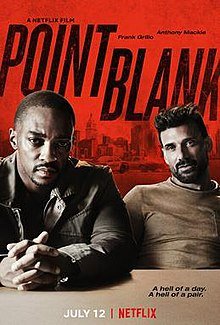 Netflix’ Point Blank, the American remake of the 2010 French action film of the same title, has been streaming on Netflix for a month now. We finally had the time to watch the movie and here’s what we think.

Stars Anthony Mackie and Frank Grillo, who you may recognize better from the Captain America films as The Falcon and Rumlow/Crossbones respectively, headline this American remake of the 2010 French film now produced by streaming giant Netflix. Their Point Blank characters seem to have continued their grudge match from the MCU films, at least in the first half of the film. And given their history, the chemistry between the two film leads is quite admirable.

You could see quite clearly that both stars know and enjoy working with each other very much. Both leads gave their characters just the right amount of playfulness but would sometimes end up as comedic, which in my opinion contributed to what was the downfall of this film.

Marcia Gay Harden, better recognized in her recent role as Dr. Leanne Rorish from the well-loved but short-lived hospital drama Code Black, surprises with her sound portrayal of a corrupt cop baddie.

From what we’ve read online regarding the original French film, there was a lot of opportunity to get this movie right but this American remake gets marred often-meaningless dialogue and mediocre storytelling.

Here’s the thing, when you watch a movie and you had to google the plot afterwards because you didn’t quite get it, then you still end up confused because the internet was of no help, it’s either you’re not paying attention or the movie is just not that good. In this case, it’s probably the latter.

We did get quite some action and the premise was really interesting. It’s just a little disappointing when you expect for the film to continue to expand its bubbles and soar higher but along the way it somehow manages to burst itself with clumsy storytelling that would leave you googling for answers and still leaves you feeling blank.

To be honest, this movie kind of made us wanted to see the original French movie. And we just might, in the future.

Maybe just skip this one especially if you’ve already watched the original French film. However, if you don’t mind the pointless writing and storytelling, this film is still a good film with quite some good action and great casting.

Here’s our rating for the movie.

Be sure to let us know your thoughts on the movie by leaving a comment and/or giving the film your own rating.