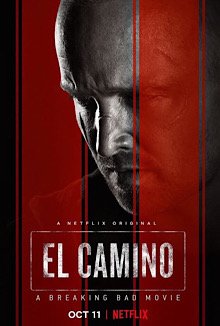 Picking up where it left off

Six years after the series finale, Breaking Bad fans get something to exult over with El Camino: A Breaking Bad Movie. Aaron Paul returns as Jesse Pinkman along with series creator Vince Gilligan multi-tasking as writer, producer, and director.

As a recap, in the series finale, we saw Walter White aka Heisenberg (Bryan Cranston), the Chemistry teacher turned meth cook, outsmarting the neo-nazi gang that kept his former partner, Jesse Pinkman (Aaron Paul) captive and blackmailed him into cooking meth, by setting up a remote-controlled machine gun which essentially decimated everything in its path. Unfortunately for Walter, his weapon also managed to wound him fatally. Meanwhile, Jesse, after having been freed after the raucous, refuses to kill Walter (at his request) and sets off driving away in a El Camino car leaving Walter with no choice but to wait for his eventual demise.

Not to worry though because if you are watching through Netflix, a recap is shown before the movie. Better yet, watch Aaron Paul below hilariously recapping the entire series on Jimmy Kimmel live.

Speaking about picking up things, El Camino picks up more than just where the story ended for Breaking Bad but also the entire spirit of the series. The crime, drama, and the thrill and anticipation that would surely get your pulses racing. And above all, in typical Breaking Bad fashion, El Camino is hilarious in the most inappropriate moments.

“Actions have consequences”, as the director puts it. El Camino manages to stay true to its Breaking Bad roots with clever, unique, and interweaving storytelling that will keep you on the edge of your seats all throughout. Though, this time, a lot of flashbacks are shown but ones that are necessary in order to take a deeper dive into Jesse Pinkman’s story during his long stint as captive/hostage meth cook.

Vince Gilligan basically risked his and his beloved series’ legacy. Breaking Bad ended in the best way possible, that’s a fact, and there are only two ways this film could go. Bad or Good.

Boy, we’d be so pissed if El Camino turned out bad. Thankfully, that was not the case. El Camino proved to be a worthy addition to Breaking Bad’s award-winning legacy along with the prequel series “Better Call Saul”.

Aaron Paul sure did impress us in his return as Jesse Pinkman, effectively conveying the emotional whirlwind that happened to the character and his eventual maturity. Jesse Plemons also returns as Todd Alquist, in flashback scenes during Pinkman’s time as his captive.

Also, be on the lookout for familiar faces as some of the cast from the series makes some appearance worthy of some Breaking Bad nostalgia. Sadly, the late Robert Forster, who portrays Ed Galbraith, a vacuum salesman and new identity specialist, makes his final movie appearance in this film after having died of lung cancer on the day of the film’s release. May his soul rest in peace.

El Camino is absolutely a must-watch. Even more so for fans of the “Breaking Bad” series.

El Camino is streaming on Netflix starting October 11, 2019 and is also shown in some theaters in the states.