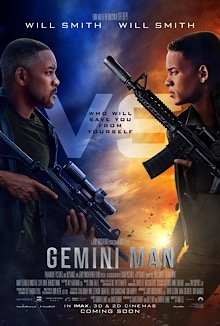 Will Smith fans, rejoice! This is probably the only film where you’ll get the most of Will Smith, literally!

Gemini Man’s premise as the trailer visibly teased is that Will Smith portrays dual roles. First, an aging government assassin named Henry Brogan, who gets betrayed by the very government he served and gets hunted by his younger clone version, also played by a digitally de-aged Will Smith.

Just watch the trailer below to see what we mean, its crazy!

Though you’ll definitely get a lot of Will Smith in this, there’s more and then less to it than that.

Veteran actor, Clive Owen (King Arthur, Children of Men),also makes an appearance and proves he can be as good as any villain as can be. Mary Elizabeth Winstead (The Thing, A Good Day to Die Hard) and Benedict Wong (Doctor Strange, The Martian), rounds up the cast with roles that helped provide a lighter tone to the movie. Though we can’t help but think that they were just there to lighten up the mood and nothing more.

The story is good and that’s just it. It’s a good action movie but there’s nothing fancy or extra about it. It’s not necessarily something that we haven’t seen or heard before. It actually gave us some Bourne, Jack Reacher, The Equalizer feels. Boy, this plot is getting more and more common nowadays.

It’s just…good. And while that isn’t necessarily a bad thing, it certainly could have been better.

A New Trend in Filmmaking?

Academy Award winner, Ang Lee, directs this one and was shot and intended to be shown in a high frame rate (HFR) version. Unfortunately for us, we did not see it in the intended format. We’re not even sure if there are cinemas in the Philippines that will show it in its intended version.

Hmmn. This is probably the reason why some action sequences looked weird and fake even. It’s also possibly why Will Smith’s digitally restored character seemed a little awkward and unnatural to the eye.

Once again, we were not able to watch it in its intended HFR format. Maybe, just maybe, our experience would have been a lot better. Then again, Ang Lee is very positive about this format becoming the new norm in the very near future, so maybe we will be seeing more films in this format and this might take a while to getting used to.

Just to give you an idea about the frame rate thingy, this is the number of images shown per second commonly measured in frames per second (fps). The standard for cinema viewing is at 24fps, Gemini Man is intended to be at 120fps and that’s five times more images in a second. Higher frame rates makes images a lot crisper and transition smoother, helpful during gameplay to prevent lags. Most PC games nowadays run at 60fps. How it translates in movies is still debatable and Gemini Man may just be another miss for HFR advocates.

We rate Gemini Man as somewhere in the middle, so watch if you are a fan of Will Smith and would like to be the one of the few people to join the HFR bandwagon. Skipping is fine, too, sure.

Gemini Man is showing in Philippine theaters starting October 9, 2019. You may view the film’s trailer here.

Let us know what you think of the movie by commenting below or by giving the film your own rating.

Read more of our movie and TV series reviews by clicking here.