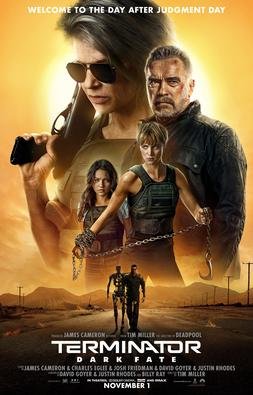 If you can no longer remember what happened to the three movies immediately preceding Dark Fate, Terminator: Rise of the Machines, Terminator: Salvation, Terminator: Genisys, don’t worry because according to the film’s original creator and director James Cameron, the events that took place in those three films were basically ignored in Dark Fate. Then again, they weren’t as good as the first two so we bet you already forgot about them anyway.

Still confused? The video below will help you understand better. Or continue reading our Terminator: Dark Fate Film Review.

Going back with the R-rating

The last three films came out with a more wholesome theme than the James Cameron’s version, which is probably the reason why, for some fans, those three were a letdown.

This time, James Cameron entrusted the franchise to someone who is no stranger to R-rated movies, Tim Miller, who made his directorial debut in 2016 with Deadpool. “Enough of a resume for you?”

This definitely worked out well as it allowed for the movie to depict as much violence as necessary to give the audience a superior story.

That said, kids below 13 years old, this one’s not for you. Sorry.

T1 and T2 are arguably the films that catapulted Arnold Schwarzenegger to super stardom. And obviously, he’s back…one more time. This time, as a much older version of the time-traveling robot assassin.

The real stars of the show, however, were the women. Headed by Linda Hamilton, who returned to her Sarah Connor character with much anticipation from fans, the cast also includes Mackenzie Davis (Blade Runner 2049) who plays Grace, a human converted into a cyborg and sent to the past to protect Natalia Reyes (Dani Ramos) from the more advanced and deadlier robot the Rev-9 played by Gabriel Luna (Agents of Shield).

Plot sounds familiar? Well, it should be, because this is basically the premise of the Terminator movies. But no, Dark Fate did more than just recycle its predecessors’ plot. For one, the time travel logic in this film, though not sound, was not as messy as the other films in the franchise. What’s best is that the film provided enough twists and significant departure from the film’s original source material all while maintaining its identity as a Terminator film.

Be sure to check our trailers page for more videos.

If you are a fan of the franchise, watch out for callbacks from the T1 and T2 films such as the iconic line “I’ll be back”. Only this time, Linda Hamilton gets to say it. Schwarzenegger’s lines as the Terminator provide some comic relief. Meanwhile, Gabriel Luna’s portrayal of the new robot villain proved to be a great casting choice. We also can’t help but appreciate the costume designs, although simple, stayed true to the film’s roots. And finally, the two newer ladies Mackenzie Davis and Natalia Reyes could be on their way to mega stardom with the incredible performance they did in this film, if they aren’t already.

Definitely a must-watch! Terminator: Dark Fate has absolutely resurrected the franchise and is the sequel that the fans deserve.

What did you think of the movie? Tell us by commenting below or by giving the film your own rating.

Read more of our reviews on this page.

Jumanji: The Next Level Film Review